Palbociclib is a highly selective, reversible inhibitor of cyclin-dependent kinases (CDK) 4 and 6. Cyclin D1 and CDK4/6 are downstream of multiple signalling pathways which lead to cellular proliferation.

Through inhibition of CDK4/6, palbociclib reduced cellular proliferation by blocking progression of the cell from G1 into S phase of the cell cycle. Testing of palbociclib in a panel of molecularly profiled breast cancer cell lines revealed high activity against luminal breast cancers, particularly ER-positive breast cancers. In the cell lines tested, the loss of retinoblastoma (Rb) was associated with loss of palbociclib activity. However, in a follow-up study with fresh tumour samples, no relation between RB1 expression and tumour response was observed. Similarly, no relation was observed when studying the response to palbociclib in in vivo models with patient-derived xenografts (PDX models). Available clinical data are reported in the clinical efficacy and safety section (see section 5.1).

The effect of palbociclib on the QT interval corrected for heart rate (QTc) interval was evaluated using time matched electrocardiogram (ECG) evaluating the change from baseline and corresponding pharmacokinetic data in 77 patients with advanced breast cancer. Palbociclib did not prolong the QTc to any clinically relevant extent at the recommended dose of 125 mg daily (Schedule 3/1).

The efficacy of palbociclib in combination with letrozole versus letrozole plus placebo was evaluated in an international, randomised, double-blind, placebo-controlled, parallel-group, multicentre study conducted in women with ER-positive, HER2-negative locally advanced breast cancer not amenable to resection or radiation therapy with curative intent or metastatic breast cancer who had not received prior systemic treatment for their advanced disease.

A total of 666 postmenopausal women were randomised 2:1 to the palbociclib plus letrozole arm or placebo plus letrozole arm and were stratified by site of disease (visceral versus nonvisceral), disease-free interval from the end of (neo)adjuvant treatment to disease recurrence (de novo metastatic versus ≤ 12 months versus > 12 months), and by the type of prior (neo)adjuvant anticancer therapies (prior hormonal therapy versus no prior hormonal therapy). Patients with advanced symptomatic, visceral spread, that were at risk of life-threatening complications in the short term (including patients with massive uncontrolled effusions [pleural, pericardial, peritoneal], pulmonary lymphangitis, and over 50% liver involvement), were not eligible for enrolment into the study.

Table 6 shows the efficacy results based on the primary and the updated analyses from the PALOMA-2 study, as assessed by the investigator and by the independent review.

The Kaplan-Meier curves for PFS based on the updated cutoff date of 31 May 2017 are displayed in Figure 1 below. 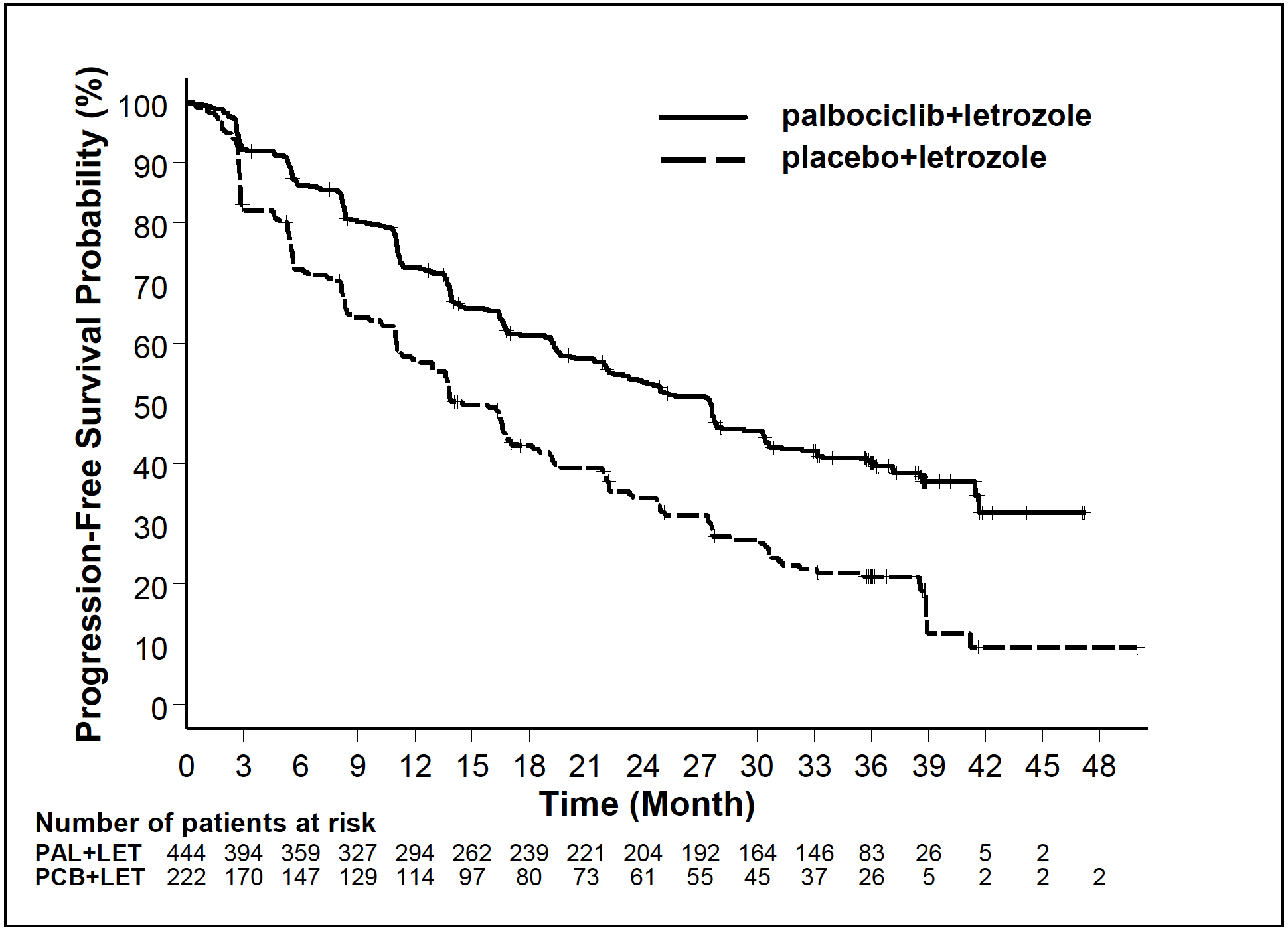 A series of prespecified subgroup PFS analyses was performed based on prognostic factors and baseline characteristics to investigate the internal consistency of treatment effect. A reduction in the risk of disease progression or death in favour of the palbociclib plus letrozole arm was observed in all individual patient subgroups defined by stratification factors and baseline characteristics in the primary and in the updated analysis.

Additional efficacy measures (OR and time to response [TTR]) assessed in the sub-groups of patients with or without visceral disease based on the 31-May-2017 updated cutoff date are displayed in Table 7.

The efficacy of palbociclib in combination with fulvestrant versus fulvestrant plus placebo was evaluated in an international, randomised, double-blind, parallel-group, multicentre study conducted in women with HR-positive, HER2-negative locally advanced breast cancer not amenable to resection or radiation therapy with curative intent or metastatic breast cancer, regardless of their menopausal status, whose disease progressed after prior endocrine therapy in the (neo)adjuvant or metastatic setting.

A total of 521 pre/peri- and postmenopausal women who had progressed on or within 12 months from completion of adjuvant endocrine therapy or on or within 1 month from prior endocrine therapy for advanced disease, were randomised 2:1 to palbociclib plus fulvestrant or placebo plus fulvestrant and stratified by documented sensitivity to prior hormonal therapy, menopausal status at study entry (pre/peri- versus postmenopausal), and presence of visceral metastases. Pre/perimenopausal women received the LHRH agonist goserelin. Patients with advanced/metastatic, symptomatic, visceral spread, that were at risk of life-threatening complications in the short term (including patients with massive uncontrolled effusions [pleural, pericardial, peritoneal], pulmonary lymphangitis, and over 50% liver involvement), were not eligible for enrolment into the study.

Patients were well matched for baseline demographics and prognostic characteristics between the palbociclib plus fulvestrant arm and the placebo plus fulvestrant arm. The median age of patients enrolled in this study was 57 years (range 29, 88). In each treatment arm the majority of patients were White, had documented sensitivity to prior hormonal therapy, and were postmenopausal.
Approximately 20% of patients were pre/perimenopausal. All patients had received prior systemic therapy and most patients in each treatment arm had received a previous chemotherapy regimen for their primary diagnosis. More than half (62%) had an ECOG PS of 0, 60% had visceral metastases, and 60% had received more than 1 prior hormonal regimen for their primary diagnosis.

The primary endpoint of the study was investigator-assessed PFS evaluated according to RECIST 1.1. Supportive PFS analyses were based on an Independent Central Radiology Review. Secondary endpoints included OR, CBR, OS, safety, and time-to-deterioration (TTD) in pain endpoint.

The study met its primary endpoint of prolonging investigator-assessed PFS at the interim analysis conducted on 82% of the planned PFS events; the results crossed the prespecified Haybittle-Peto efficacy boundary (α=0.00135), demonstrating a statistically significant prolongation in PFS and a clinically meaningful treatment effect. A more mature update of efficacy data is reported in Table 8.

The results from the investigator-assessed PFS and final OS data from PALOMA-3 study are presented in Table 8. The relevant Kaplan-Meier plots are shown in Figures 2 and 3, respectively. 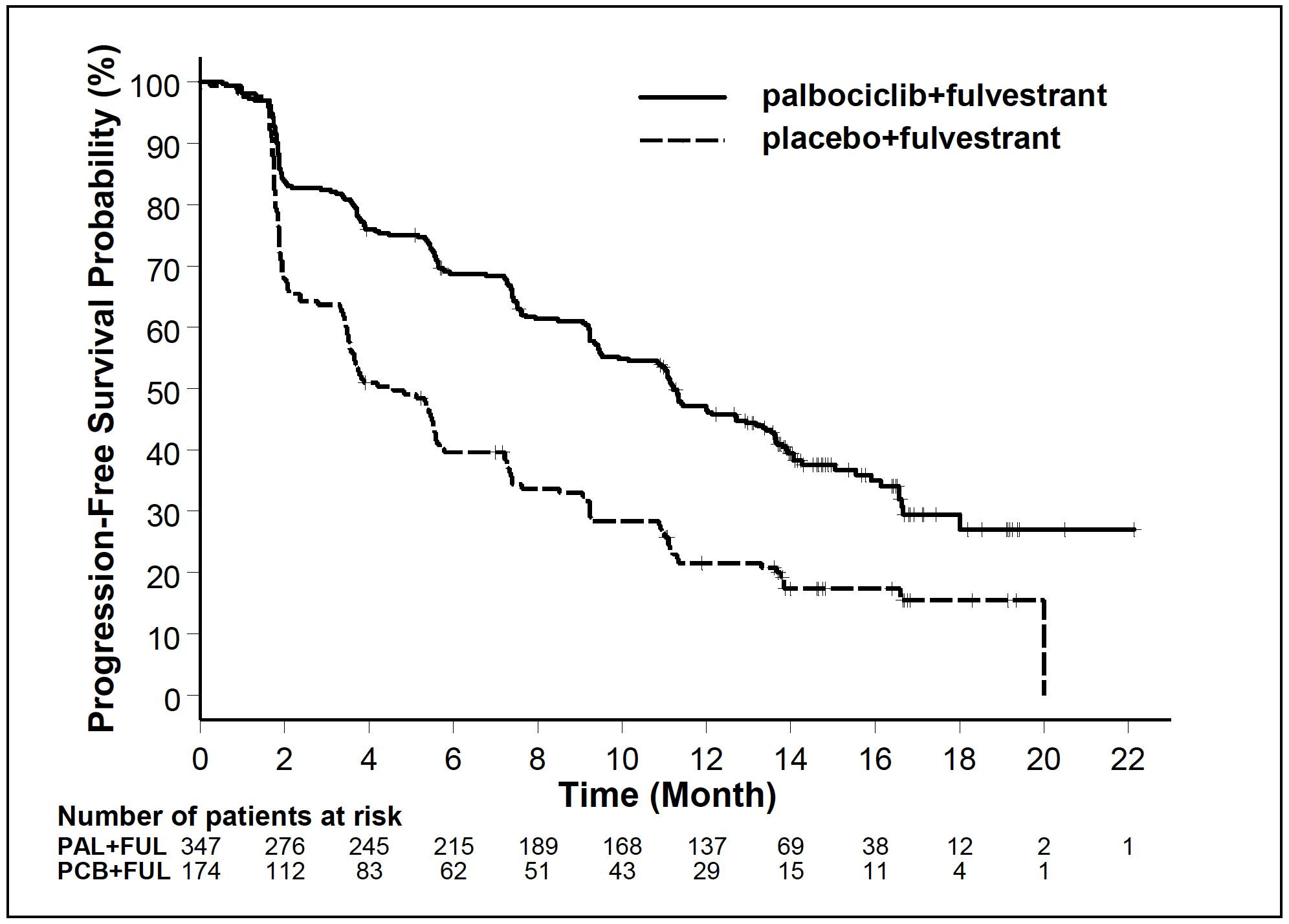 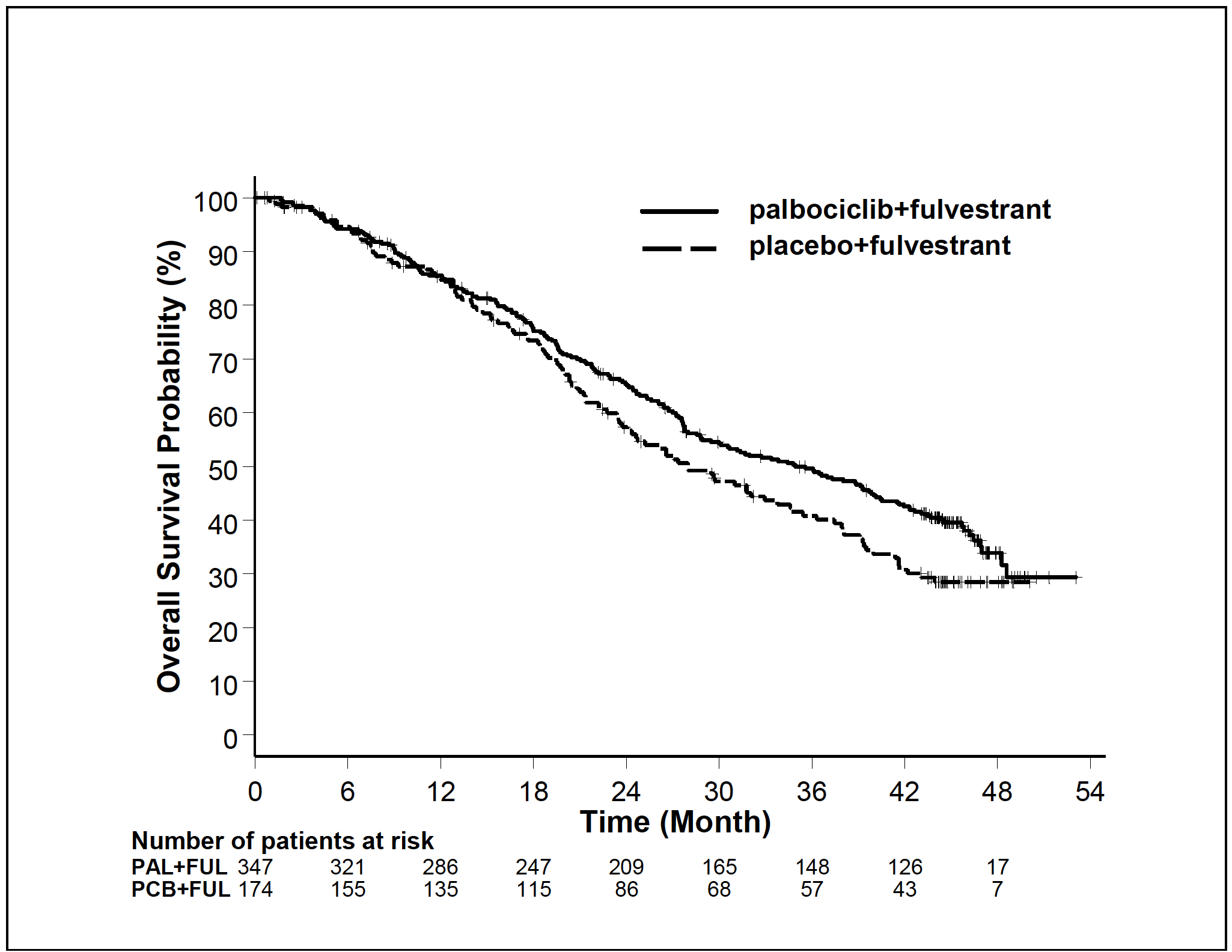 Additional efficacy measures (OR and TTR) assessed in the sub-groups of patients with or without visceral disease are displayed in Table 9.

Patient-reported symptoms were assessed using the European Organisation for Research and Treatment of Cancer (EORTC) quality of life questionnaire (QLQ)-C30 and its Breast Cancer Module (EORTC QLQ-BR23). A total of 335 patients in the palbociclib plus fulvestrant arm and 166 patients in the fulvestrant only arm completed the questionnaire at baseline and at least 1 postbaseline visit.

Time-to-Deterioration was prespecified as time between baseline and first occurrence of ≥ 10 points increase from baseline in pain symptom scores. Addition of palbociclib to fulvestrant resulted in a symptom benefit by significantly delaying time-to-deterioration in pain symptom compared with placebo plus fulvestrant (median 8.0 months versus 2.8 months; HR of 0.64 [95% CI: 0.49, 0.85]; p< 0.001).

The European Medicines Agency has waived the obligation to submit the results of studies with IBRANCE in all subsets of the paediatric population in the treatment of breast carcinoma (see section 4.2 for information on paediatric use).

The pharmacokinetics of palbociclib were characterised in patients with solid tumours including advanced breast cancer and in healthy volunteers.

The mean Cmax of palbociclib is generally observed between 6 to 12 hours following oral administration. The mean absolute bioavailability of palbociclib after an oral 125 mg dose is 46%. In the dosing range of 25 mg to 225 mg, the area under the curve (AUC) and Cmax increase proportionally with dose in general. Steady state was achieved within 8 days following repeated once daily dosing.
With repeated once daily administration, palbociclib accumulates with a median accumulation ratio of 2.4 (range 1.5-4.2).

In vitro and in vivo studies indicate that palbociclib undergoes extensive hepatic metabolism in humans. Following oral administration of a single 125 mg dose of [14C]palbociclib to humans, the major primary metabolic pathways for palbociclib involved oxidation and sulphonation, with acylation and glucuronidation contributing as minor pathways. Palbociclib was the major circulating drug-derived entity in plasma.

The majority of the material was excreted as metabolites. In faeces, the sulfamic acid conjugate of palbociclib was the major drug-related component, accounting for 25.8% of the administered dose. In vitro studies with human hepatocytes, liver cytosolic and S9 fractions, and recombinant sulphotransferase (SULT) enzymes indicated that CYP3A and SULT2A1 are mainly involved in the metabolism of palbociclib.

The geometric mean apparent oral clearance (CL/F) of palbociclib was 63 L/h, and the mean plasma elimination half-life was 28.8 hours in patients with advanced breast cancer. In 6 healthy male subjects given a single oral dose of [14C]palbociclib, a median of 92% of the total administered radioactive dose was recovered in 15 days; faeces (74% of dose) was the major route of excretion, with 17% of the dose recovered in urine. Excretion of unchanged palbociclib in faeces and urine was 2% and 7% of the administered dose, respectively.

Paediatric population
Pharmacokinetics of palbociclib has not been evaluated in patients < 18 years of age.

Ethnicity
In a pharmacokinetic study in healthy volunteers, palbociclib AUCinf and Cmax values were 30% and 35% higher, respectively, in Japanese subjects compared with non-Asian subjects after a single oral dose. However, this finding was not reproduced consistently in subsequent studies in Japanese or Asian breast cancer patients after multiple dosing. Based on an analysis of the cumulative pharmacokinetic, safety, and efficacy data across Asian and non-Asian populations, no dose adjustment based on Asian race is considered necessary.

The primary target organ findings of potential relevance to humans included haematolymphopoietic and male reproductive organ effects in rats and dogs in studies up to 39 weeks duration. Effects on glucose metabolism were associated with findings in the pancreas and secondary effects on eye, teeth, kidney, and adipose tissue in studies ≥ 15 weeks duration in rats only and bone changes were observed in rats only following 27 weeks of dosing. These systemic toxicities were generally observed at clinically relevant exposures based on AUC. In addition, cardiovascular effects (QTc prolongation, decreased heart rate, and increased RR interval and systolic blood pressure) were identified in telemetered dogs at ≥ 4 times human clinical exposure based on Cmax. The reversibility of the effects on glucose homeostasis, pancreas, eye, kidney, and bone was not established following a 12-week nondosing period, whereas partial to full reversal of effects on the haematolymphopoietic and male reproductive systems, teeth, and adipose tissue was observed.

Palbociclib was not mutagenic in a bacterial reverse mutation (Ames) assay and did not induce structural chromosomal aberrations in the in vitro human lymphocyte chromosome aberration assay.

Palbociclib induced micronuclei via an aneugenic mechanism in Chinese Hamster Ovary cells in vitro and in the bone marrow of male rats at doses ≥ 100 mg/kg/day. The exposure of animals at the no observed effect level for aneugenicity was approximately 7 times human clinical exposure based on AUC.

Palbociclib is a reversible inhibitor of cyclin-dependent kinases 4 and 6, which are both involved in regulating the cell cycle. It may therefore have risk of foetal harm if used during pregnancy.